Phil Harling is a specialist in the modern history of Britain and the British Empire. His current research project, Managing Mobility: The British Imperial State and Global Migration, 1830-1870, is under contract with Cambridge University Press. He is also author of The Waning of 'Old Corruption': The Politics of Economical Reform in Britain, 1779-1846 (Oxford, 1996), and The Modern British State: An Historical Introduction (Polity, 2002), and numerous book chapters and articles in outlets such as Past & Present, the Journal of Modern History, and the Journal of British Studies. 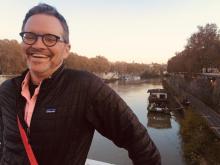