Ph.D., ABD, University of Kentucky
Advisor: Professor David Olster
Dissertation: “Our Endeavors to Obtain the Favor of God: Constantine, His Heirs, and the Creation of an Imperial Religion”

“Reconsidering the Role of Constantine at the Council of Nicaea, 325” In preparation.

“No one Can Doubt that the Father is Greater: Constantius II and the Blasphemia at Sirmium in 357,” Iosif Volotskii and Eastern Christianity: Essays Across Seventeen Centuries, David Goldfrank, Valeria Nollan, and Jennifer Spock (eds), New Academia Publishing, 2017. 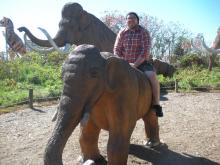