Dara's academic research interests include Gilded Age Southern History, specifically questions of democracy and equality women were asking in rural areas of the South.  As weather, illness, scarcity or abundance necessitated women functioning in male dominated roles how were power differentials resolves or exacerbated?  Additionally Dara is interested in mid 20th century civil rights and freedom struggles.  Specifically she is interested in the ways that areas that were the sites of specific civil rights incidences embrace, avoid, hide, or commemorate their past.

As a hobby Dara and her husband research abandoned Florida townsites in order to understand why certain areas flourished and others faultered.  This is usually an exercise in driving great distances to places that used to be somewhere, but are now the middle of no where, in order to take photographs of things that longer are.  When pared up with primary source documents a pretty good record of the town can be constructed, and if the ghosttown gods smile upon Dara and her husband maps and photographs can be found.

While she is out on the backroads of the Sunshine State Dara paints and photographs what she believes is elusive yet distinctive Florida vistas. 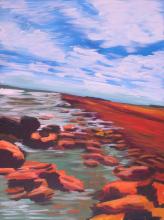