Sustainability Forum is Dec. 1; Abstracts Due This Friday

The 5th Annual Sustainability Forum, sponsored by the Tracy Farmer Institute for Sustainability and the Environment and the UK Appalachian Center, will take place from 4:30-7 p.m. Tuesday, Dec. 1, at the Hilary J. Boone Center.

Please join us for the 2015 Sustainability Forum on Tuesday, December 1, 2015 from 4:30 p.m. to 6:30 p.m. at the Hilary J. Boone Center on UK's Campus! This event is sponsored by the Tracy Farmer Institute for Sustainability and the Environment and the UK Appalachian Center.  Students are encouraged to submit their posters for consideration, and the top posters will be given prizes.  The deadline for submissions is Friday, November 20, 2015. Please contact Suzette Walling for submission instructions and more information: tfise@uky.edu.  Also see the Call for posters below our flyer and the Tracy Farmer Institute's website: http://www.tfise.uky.edu/showcase. 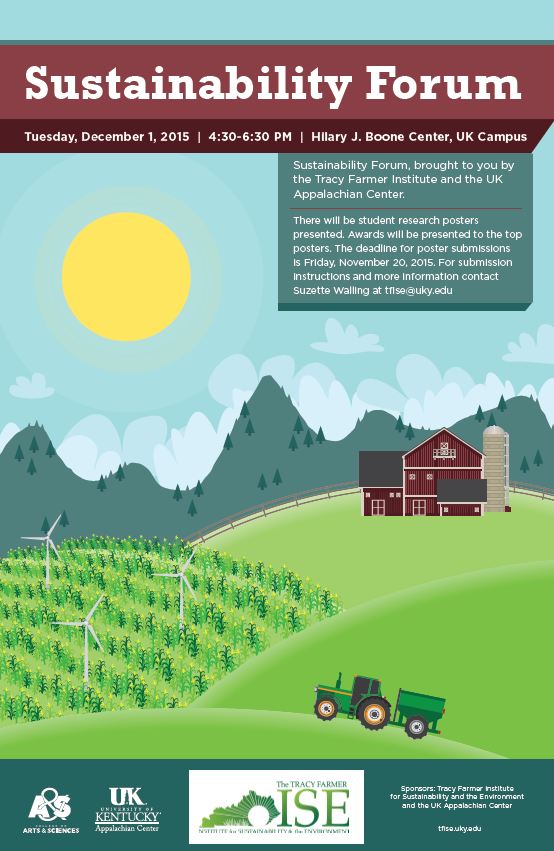 UK Appalachian Studies Director and Professor of Sociology, Dr. Shaunna Scott will present her work as a recipient of a UK Appalachian Center 2015 Eller Billings Mini Grant on Wednesday, November 18, 2015 from 12 p.m. to 1:30 p.m.  This SWAP (Sharing Work on Appalachia in Progress) Event is free, and students, faculty, and staff are welcome and encouraged to attend!  Dr. Scott's talk is entitled From Collaboration to Network Analysis: A Viable Option to Assist a Community in its Post-Coal Development.  The event will be held at the UK Appalachian Center, 624 Maxwelton Court, and lunch will be provided. 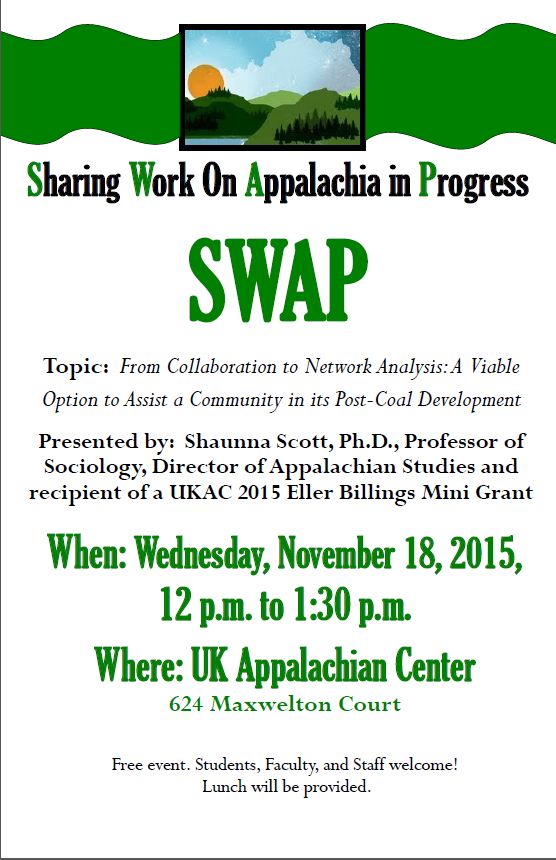 Please, join us for this free event!  Two of our 2015 Eller Billings Mini Grant recipients will share their work on Thursday, November 5, 2015 from 12 p.m. to 1:30 p.m. at the UK Appalachian Center, 624 Maxwelton Court.  Sara Beth Freytag is a student in the Master's Program in the Department of Forestry; her talk title is Effects of Mountaintop Removal Mining on Population Dynamics of Stream Salamanders.  Jasper Waugh Quasebarth is a Ph.D. student in the Department of Anthropology; his talk title is Finding the Singing Spruce: Locating Material in West Virginian Musical Instrument Craft.  Lunch will be provided, and students, faculty and staff are welcome!

Please, join us in welcoming Panagioti Tsolkas as part of our UK Appalachian Center Speaker Series!  This talk is entitled Just Transition not Toxic Prisons: the Fight Against Prison Building in Coal Country.  Mr. Tsolkas will present his talk in Room 208 of the White Hall Classroom Building on Wednesday, October 7, 2015 from 3:30 to 5 p.m.  He is the current Special Projects Coordinator at the Human Rights Defense Center in Lake Worth, FL, the Prison Ecology Project, has been the editor for the Earth First! Journal, and has worked on many other projects and as an activist. This is a free event and has been co-sponsored by the Departments of Sociology and Political Science. 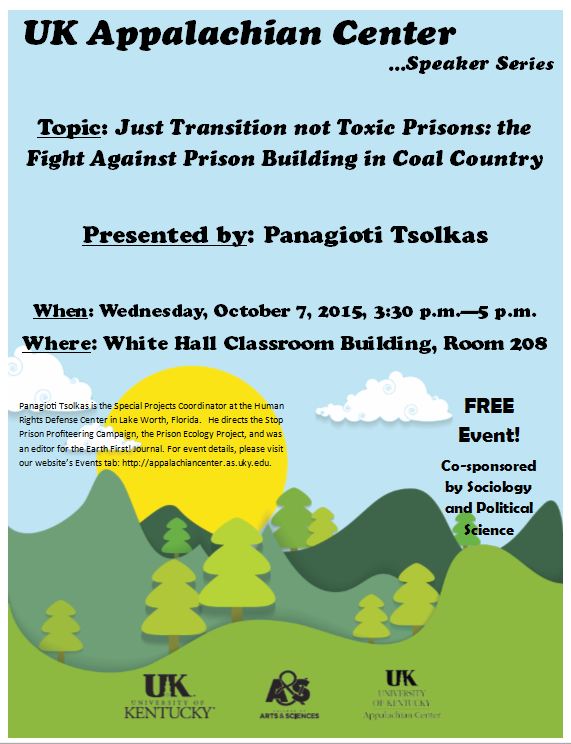 Please, join us in welcoming Dr. Susan Hyatt for a talk in the UK Appalachian Center Speaker Series!  Friday, October 16, 2015 from 4 p.m. to 5:30 p.m., Dr. Hyatt will give a talk entitled We Never Met Strangers--We Met People: Using Collaborative Antrhopology to Uncover Hidden Histories of Race and Religion in an Indianapolis Neighborhood.  This will be held in the White Hall Classroom Building, Room 102 and is a free event, co-sponsored by African American and Africana Studies, Jewish Studies, and Anthropology.  All are welcome to join in a pre-talk conversation from 2 p.m. to 3:30 p.m. at the UK Appalachian Center, 624 Maxwelton Court (across Limestone from the UK Law Building).  Please, see below for her talk abstract and a brief bio. 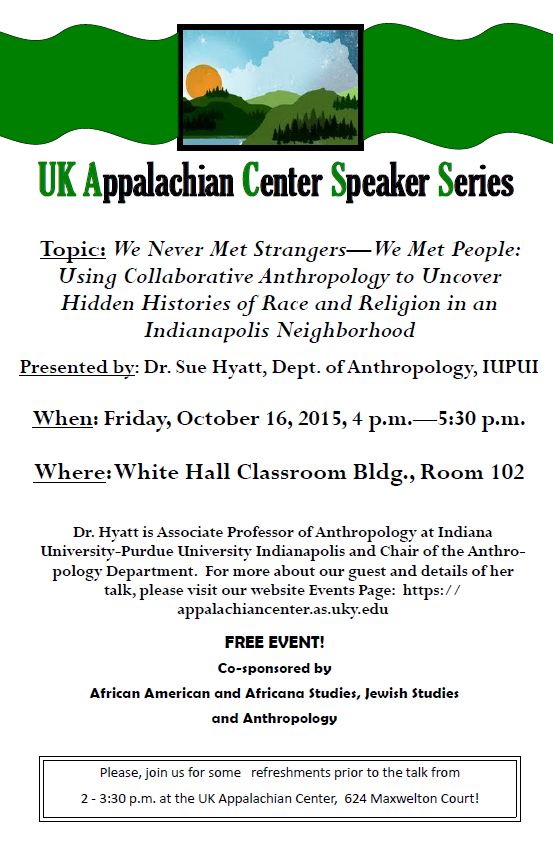 Collaborative ethnography, as defined by Luke Eric Lassiter, is "a very specific kind of ethnography that builds on the cooperative relationships already present in the ethnographic research process… and endeavors to engender texts that are more readable, relevant, and applicable to local communities of ethnographic collaborators (i.e. local publics)." Working with what Lassiter calls "local publics" involves not only making anthropological methods and insights "user-friendly"; it also involves developing and implementing interdisciplinary strategies, including archival work, mapping and various other technologies, in order to provide communities with products that are accessible and useful to them.

In 2010, Applied Anthropology students from Indiana University in Indianapolis began collecting oral histories, photographs and other memorabilia from African-American and Jewish elders, who had once lived side-by-side in what had once been one of the most multi-ethnic neighborhoods in the city: the near Southside.  While the material setting of the neighborhood has largely been destroyed by successive waves of urban development, post-war upward mobility, and by the construction of an interstate in the early 1970s, its social landscape continues to be fondly recalled by its former inhabitants. In this talk, I explore the stories of those residents, their neighborhood and the project that brought them back together nearly 50 years after the neighborhood was dispersed.  I also describe the multiple products that were created and disseminated through this collaboration.

Dr. Susan Hyatt is Associate Professor of Anthropology at Indiana University-Purdue University Indianapolis (IUPUI) and Chair of the Anthropology Department.  She completed her MA in Anthropology at the University of Michigan in 1980.  From 1981-89, she worked as a community organizer in Southwest Chicago prior to returning to graduate school at the University of Massachusetts in 1989, where she completed her PhD in 1996.  As a result of her experiences in Chicago, she became interested in the impact of local-level campaigns for social justice on the low-income and working-class women who are often the backbone of such movements.  That was the topic of her doctoral fieldwork, which she carried out in a deindustrialized municipality in northern England in the early to mid-1990s. After 8 ½ years teaching at Temple University in Philadelphia, in 2005 she moved to the Indianapolis branch of Indiana University where she founded the state’s first MA program in Applied Anthropology.  In 2010, the Indiana Campus Compact awarded her with the Brian Hiltunen Award for the Outstanding Scholarship of Civic Engagement and in 2012, she received the Chancellor’s Faculty Award for Excellence in Civic Engagement. In the fall 2012 semester, she served as the second Robert Harman Distinguished Visiting Scholar in Applied Anthropology at California State University in Long Beach.

UK Faculty, Staff, and Students, please join us for our first SWAP (Sharing Work on Appalachia in Progress) Event of the 2015-2015 academic year!  Mary Beth Schmid, a Ph.D. Candidate at the University of Kentucky will present her research with a talk entitled Linking Places, People, and Processes: Conventional Tomato Farming in the Southeastern US.  Mary Beth is an awardee of the UK Appalachian Center's 2015 Eller/Billing Summer Research Mini-Grant.  This talk will be at the UK Appalachian Center from 12:30 - 1:30 on Friday, September 11, 2015.  Lunch will be provided. 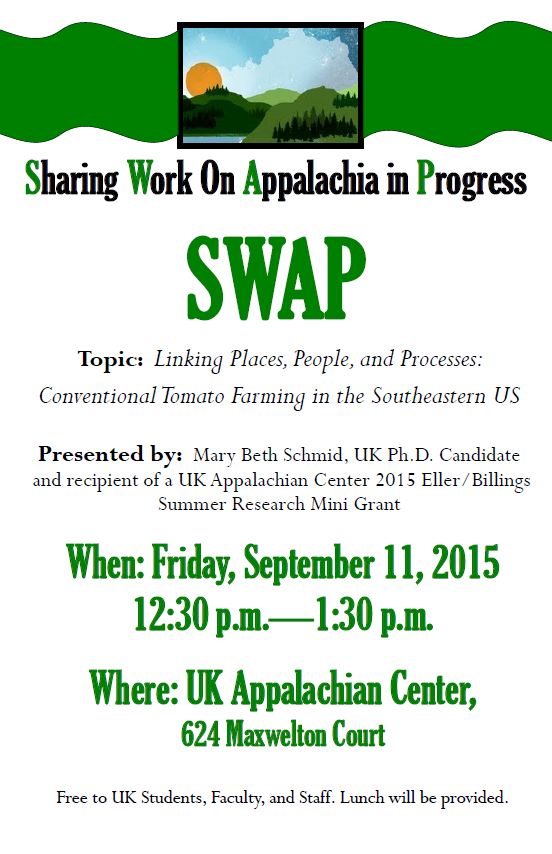 "Been to the Mountain: Appalachian Origins of the Civil Rights Movement", an Appalachian Forum

The UK Appalachian Center is happy to welcome Dr.Bill Turner for an Appalachian Forum as part of our speaker series on Civil Rights, Labor and Environmental Social Movements in Appalachia.  Dr. Turner's talk is entitled: Been to the Mountain: Origins of the Civil Rights Movement and will be held in the Whitehall Classroom Building, Room 110 from 4:30 p.m. to 5:45 p.m. on Friday, April 24, 2015.  This is a free event, and all are welcome to meet with our guest from 6 p.m. to 7 p.m. at the UK Appalachian Center after the talk. 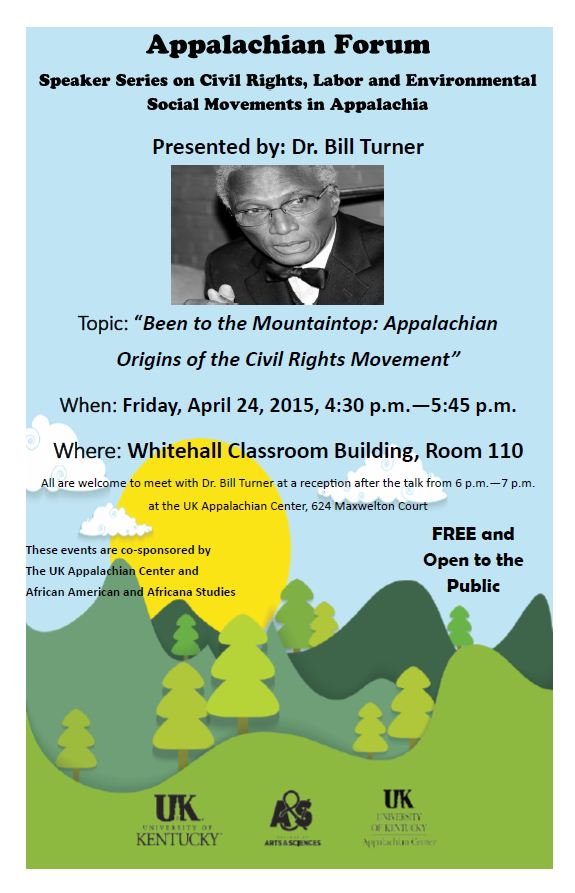