'The Rights We Have Today Are Not Guaranteed Tomorrow.' UK Expert Unpacks History of 19th Amendment 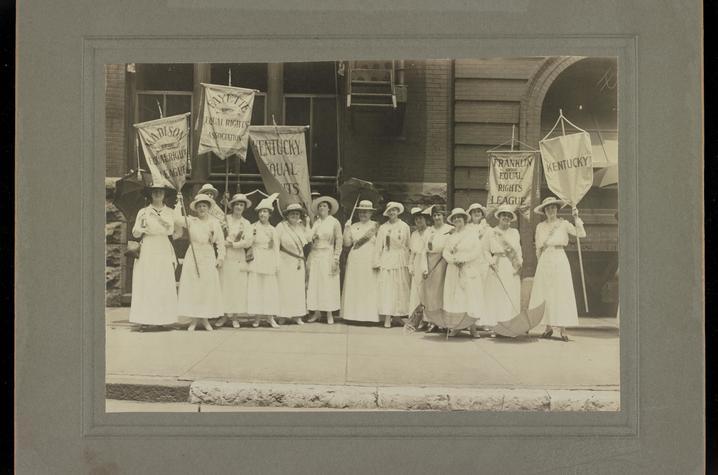 The words seem simple enough, but when they were ratified by the states 100 years ago, those words reflected the culmination of decades-long efforts by suffragists of all backgrounds.

On Aug. 18, 1920, the 19th Amendment gave women the right to vote — marking a monumental moment in history. But suffrage battles continued as women of color remained barred from casting ballots in states with intimidation tactics.

Today, it’s imperative that we — as a society — reflect on the women’s suffrage movement and those who made meaningful contributions. These figures include Laura Clay, who toured the United States making advocacy speeches, and Madeline McDowell Breckinridge, who was instrumental in persuading Kentucky legislators to ratify the 19th Amendment.

In the Q&A session below, Melanie Goan, a professor of 20th century U.S history in the College of Arts and Sciences at the University of Kentucky, explains the battle to “make” women voters and how it remains relevant today.

UKNow: You are a professor of 20th century U.S. history at UK. Why are you passionate about this field of study?

Goan: I believe humans are naturally curious about the past, especially in 2020. As we are living through historic times, the lessons of history seem even more valuable. The past may not repeat itself, Mark Twain once mused, but it often rhymes. Those rhymes are what fascinate me.

Goan: On Aug. 18, 1920, Tennessee ratified the 19th Amendment — becoming the final state needed to add the amendment to the U.S. Constitution. The constitution does not grant anyone the right to vote, which may surprise many. It has always been up to the states to determine voting qualifications, and some were stingier than others — limiting the ballot by race, gender and even land ownership.

Some American women had full voting rights before 1920, and others had partial rights (school elections, presidential or municipal suffrage). In many states, however, women had little hope of becoming voters without federal action. An amendment was necessary, but it would be hard-won.

Thirty-six states had to ratify, and pro-suffrage forces had begun to run out of possibilities by the summer of 1920. Tennessee had always seemed like a long-shot, and it was up for grabs until the last minute. The state's historic vote finally brought to a close a movement that spanned 70 years — just in time to allow many women to cast their first ballots in the presidential election three months later.

UKNow: The ratification of the 19th Amendment followed a decades-long fight for suffrage — as women no longer accepted the idea that a “true” woman was to be concerned only with the home and family.

During that time, why were more women interested in becoming involved with public affairs?

Goan: To fully understand, we have to go back to the nation’s earliest days. The American Revolution — and the Enlightenment that fueled it — led to a political reimagining of spectacular proportions. Many Americans read the founders’ promises of equality for all to include landless white men, women and African Americans. The nation quickly backed away from some of its revolutionary ideals. But women were not content to remain silent.

The ideal woman was expected to rule the domestic sphere and leave public affairs to men, but these lines quickly blurred. Women identified social problems and worked to address them through churches and voluntary associations. They became active in the abolition movement. When the Civil War broke out, they distinguished themselves by raising money, feeding and sheltering the troops and nursing the injured. Their wartime contributions — they were quick to remind men — earned them a say in the nation’s affairs.

Education, of course, was another key factor in women’s growing public involvement. As women began to attend universities following the Civil War — including co-ed institutions like UK — they carved out new professions for themselves and contributed to reform projects that made the Progressive Era such a vibrant period. Every woman who went to college became an ambassador — inspiring other energetic and imaginative young girls.

UKNow: Did the changing attitudes and culture of post-war America help contribute to the 19th Amendment’s passage?

Goan: By the nineteen teens, women’s suffrage had become a mainstream cause and World War I did a lot to make it so. A subset of women, represented by Alice Paul and her more militant National Woman’s Party, grew more radical in their demands. The National American Woman’s Suffrage Association (NAWSA) emphasized the need to remain “ladylike” and not push lawmakers too hard. But Paul was tired of being patient. She leveraged the war, organized White House pickets and highlighted the hypocrisy of Woodrow Wilson’s call to make “the world safe for democracy.” In 1918, Wilson finally declared his unqualified support for women’s suffrage — acknowledging that women who were partners in “suffering and sacrifice” should be partners in “privilege and right.”

Scholars also note that an “endgame dynamic” had developed. Each party wanted to claim credit for “making” women voters. Additionally, they feared being voted out of office by the growing number of women who had the power to make them pay at the polls.

UKNow: This amendment was initially introduced to Congress in 1878. Why did it take so long for it to pass in the House of Representatives and then the Senate?

Goan: Women who could vote seemed threatening to many Americans — including women. As a result, a strong anti-suffrage movement developed. Some argued women were too pure to vote and politics would sully them. Others feared women would use their political power to attack special interests, such as the liquor industry. Many throughout the South worried that adding new voters would jeopardize their efforts to disfranchise Black men. This resistance was a key factor in the amendment’s failure to pass in Congress.

Additionally, many suffragists disagreed that a federal amendment was the best way to win their rights — with many preferring to achieve it through state legislation. Finally, in 1916, Carrie Chapman Catt introduced her “Winning Plan,” which made a federal amendment NAWSA’s sole focus.

Goan: Woman suffrage first caught Kentuckians’ interest in the 1850s — though it was largely viewed as a “Yankee innovation” and highly controversial in a state with strong religious views.

The Commonwealth became home to the South’s first state suffrage organization in the 1880s. Four Clay sisters, along with their mother (daughters and wife of Cassius Clay, not Henry Clay), were the driving force behind Kentucky’s movement. But it was Laura Clay who made suffrage work into a career — leading the Kentucky Equal Rights Association (KERA) for a quarter century. Clay became one of the most famous Southern suffragists, but she was very conservative and grew more so over time. She was sure the South would never endorse a federal amendment. Clay argued, the only acceptable way to enfranchise women was through state, not federal means. She rallied other like-minded women who became known as “states’ rights suffragists.” When the 19th Amendment passed in Congress and was sent to the states in 1920, Clay broke ties with KERA and NAWSA and began working to prevent ratification. (It is a fascinating story, and I tell it in my new book.)

UKNow: Did the passage of the 19th Amendment grant the vote to all American women? What limitations did it pose for women of color?

Goan: Though we are celebrating the centennial of the 19th Amendment, there has also been a concentrated effort to remember the prejudices that tarnished the victory. Technically, all women should have voted after 1920, but that didn’t happen in practice. Southern states proceeded to disfranchise Black women — just as they had disfranchised Black men by circumventing the 15th Amendment. Only after the 1965 Voting Rights Act passed did large numbers of Southern Black women gain access to the ballot box. Native American women had to wait until 1924 when Congress passed the Snyder Act, which extended them citizenship rights before they could vote. However, they also faced Jim Crow-like policies that restricted their participation.

It is important to note that Kentucky never adopted poll taxes, grandfather clauses and literacy tests like its Southern neighbors. But intimidation and violence made it more difficult for Black women — and men — to vote as the 20th century unfolded. Still, many were prepared to take the risk. In 1920, as Kentucky women prepared to vote in their first presidential election, Black women organized “citizenship schools” to make sure they were ready to fulfill their new responsibility. “Aunt Judy” Perkins — a Black woman nearing 90 years old — lined up long before the polls opened on Nov. 2, 1920, and had the honor of casting the first vote in McCracken County.

UKNow: Today marks the 100th anniversary of the ratification of the 19th Amendment. What does this day mean to you? And why should others recognize its historical significance?

Goan: It’s easy to take the hard-fought battles of the past for granted.

My daughter turned 18 this year, and she will vote in her first election this November. I want her to know the sacrifice that went into securing her right, and I hope that she will pay it forward — identifying and remedying injustice.

The battle to make women voters reminds us — change does not come easily, and it does not come quickly, but we must keep fighting.

UKNow: How does the battle for equality remain ever relevant in society today?

Goan: As one commentator has noted, suffrage is not a switch that gets flipped but a dial that can be turned up or turned down. The rights we have today are not guaranteed for tomorrow and still remain out of reach for some. This anniversary is a reminder — the American experiment is imperfect and ongoing, but we each have the power to move it closer to its democratic ideals.

UK is home to some of the world’s most renowned thought leaders, and they stand ready to answer pressing questions. From epidemiology and virology to constitutional law and political science — faculty and staff expertise spans a broad range of newsworthy topics. Through a comprehensive database, the UK Office of Public Relations and Strategic Communications is working to quickly connect those experts to statewide, regional, national and international media outlets.