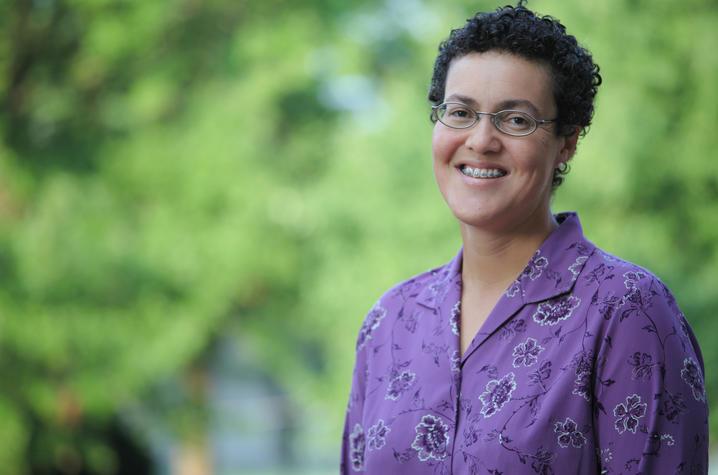 The University of Kentucky Center for Graduate and Professional Diversity Initiatives and the Graduate School's Office of Diversity and Inclusion have named Anastasia Curwood the 2020 Dr. Doris Wilkinson Faculty Inclusive Excellence Award winner. This award honors faculty who enhance the university through their inclusive leadership and vision, particularly in the realm of graduate and professional education.

"I’m incredibly humbled to receive the award, especially because I was nominated by my student," said Curwood, who is an associate professor in the Department of History and director of African American and Africana Studies (AAAS) in the UK College of Arts and Sciences. "The fact that this award honors the legacy of Dr. Wilkinson, who was a fierce advocate for diversity in the curriculum at UK, makes it even more special. I see it as a message to keep working on behalf of my students and colleagues."

Jillean McCommons, a history doctoral candidate, is the student who nominated Curwood for the award.

"Dr. Curwood has the ability to gather scholars (whether students, faculty, staff or community activists) into lasting networks of positive exchange," McCommons said. "Her efforts to ensure the hiring of faculty from historically marginalized groups has meant so much to me as a black graduate student." In reflecting over her time at UK, Curwood lists a current, multi-year cluster hiring initiative in AAAS as one moment that has been the most impactful to her as a faculty member.

"Having our first cohort arrive on campus last fall breathed energy into the intellectual pursuit of black studies here at UK," Curwood said. "It's not often that one can see the result of institution-building efforts bloom before one's eyes."

How can other faculty create a welcoming and supportive campus climate? Curwood's answer is simple.

"We all have power — we just need to identify a focus and use it," she said.

The award's namesake, Doris Wilkinson, is one of UK’s first three African American graduates. Wilkinson returned to UK in 1967 as the university’s first full-time African American faculty member, a pioneer and role model for the university and the Commonwealth. Wilkinson is the founder and first director of UK's African-American Studies and Research Program (now AAAS) and creator of the African-American History Trail in Lexington. She established the Forum for Black Faculty, the Carter G. Woodson Lecture Series and the Black Women’s Conference. As an educator, researcher and author, Wilkinson contributed significantly to the study of sociology, including articles and books on social theory, race, class and gender. She received an honorary degree from UK last fall during the university's commemoration of 70 years of integration.