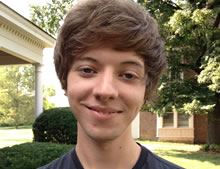 The Kentucky Branch of the English-Speaking Union awards a limited number of scholarships to qualified Kentucky college students for courses offered at institutions in the United Kingdom. Scholarship awards include tuition, lodging and two meals daily for three-week courses at the institutions chosen by the scholarship winners. Scholarships also include one week’s lodging in London and a cash allowance.

ESU scholarships are awarded for studies in English literature, history and social sciences at Oxford, Cambridge and Edinburgh University for the summer of 2014. Scholarship winners, selected through an essay and interview process for the program, are expected to become articulate lifelong ambassadors for British/American cultural exchanges.

Winstead was attracted to his area of studies in his pursuit of finding a way to lend his voice in the fight for LGBT rights. "My experience as an LGBT individual growing up in a small Western Kentucky home prompted me to use my opportunity in college to explore and fight for rights for social outsiders. I believe writing is an especially effective way to accomplish this."

Outside of the classroom, the Gaines Fellow and former Chellgren Fellow is a member of UK's Speech and Debate Team and Phi Beta Kappa. Winstead also finds time to volunteer coaching local chess clubs and previously interned with the Lexington publication Ace Weekly.

Upon completion of his undergraduate degree, Winstead plans to pursue a doctoral degree in English.

The ESU of the United States is a nonprofit, nonpolitical, educational service organization whose mission is to promote scholarship and the advancement of knowledge through the effective use of English in an expanding global community. Headquartered in New York City, the organization implements programs through a network of 78 branches throughout the United States. The Kentucky branch of the ESU was chartered in 1923 by local business and civic leaders. Since 1960, more than 450 Kentucky teachers and college students have been awarded scholarships by the Kentucky branch of the ESU.

Students interested in applying for the ESU Award should contact Pat Whitlow, director of the UK Office of External Scholarships (OES). Part of the Academy of Undergraduate Excellence within the Division of Undergraduate Education, OES assists current UK undergraduate and graduate students and recent alumni in applying for external scholarships and fellowships funded by sources (such as a nongovernment foundation or government agency) outside the university. These major awards honor exceptional students across the nation. Students who are interested in these opportunities are encouraged to begin work with OES well in advance of the scholarship deadline.