Wherever she goes, Elizabeth Rebmann of Lexington seeks to improve the world.
The Lexington native has been a Big Sister volunteer in her hometown and, on the other side of the globe, she helped women grow crops in Afghanistan.
On Wednesday, the recent University of Kentucky graduate received a 2012 Algernon Sidney Sullivan Medallion from UK in recognition of her service.
"Everyone at some point or another is called to service," Rebmann said. "It's very rewarding for me to be able to change someone's life, especially children. If you have an impact at such a young age, you can change the outcome of their life."
Two other Sullivan Medallions will be presented Feb. 22 at the Founders Day Celebration at the UK. But because Rebmann will go to Afghanistan on Sunday to start a job as a security analyst for a government contractor, UK President Eli Capilouto presented her award in a special ceremony.
"When I first read the letters of recommendation of Elizabeth, I was overwhelmed," Capilouto said. "I've been in higher education for 30 years, and it was one of the most beautiful stories I think I've ever had the pleasure of reading.
"You add luster to all of the great hopes we have for the future for all of our students at the University of Kentucky," he told Rebmann.
Rebmann, 25, graduated from UK in December with a degree in geography. In an interview after Wednesday's ceremony, Rebmann said, "I didn't think I was worthy enough for such an award. I was very honored and humbled, and I still can't believe that they chose me for this." 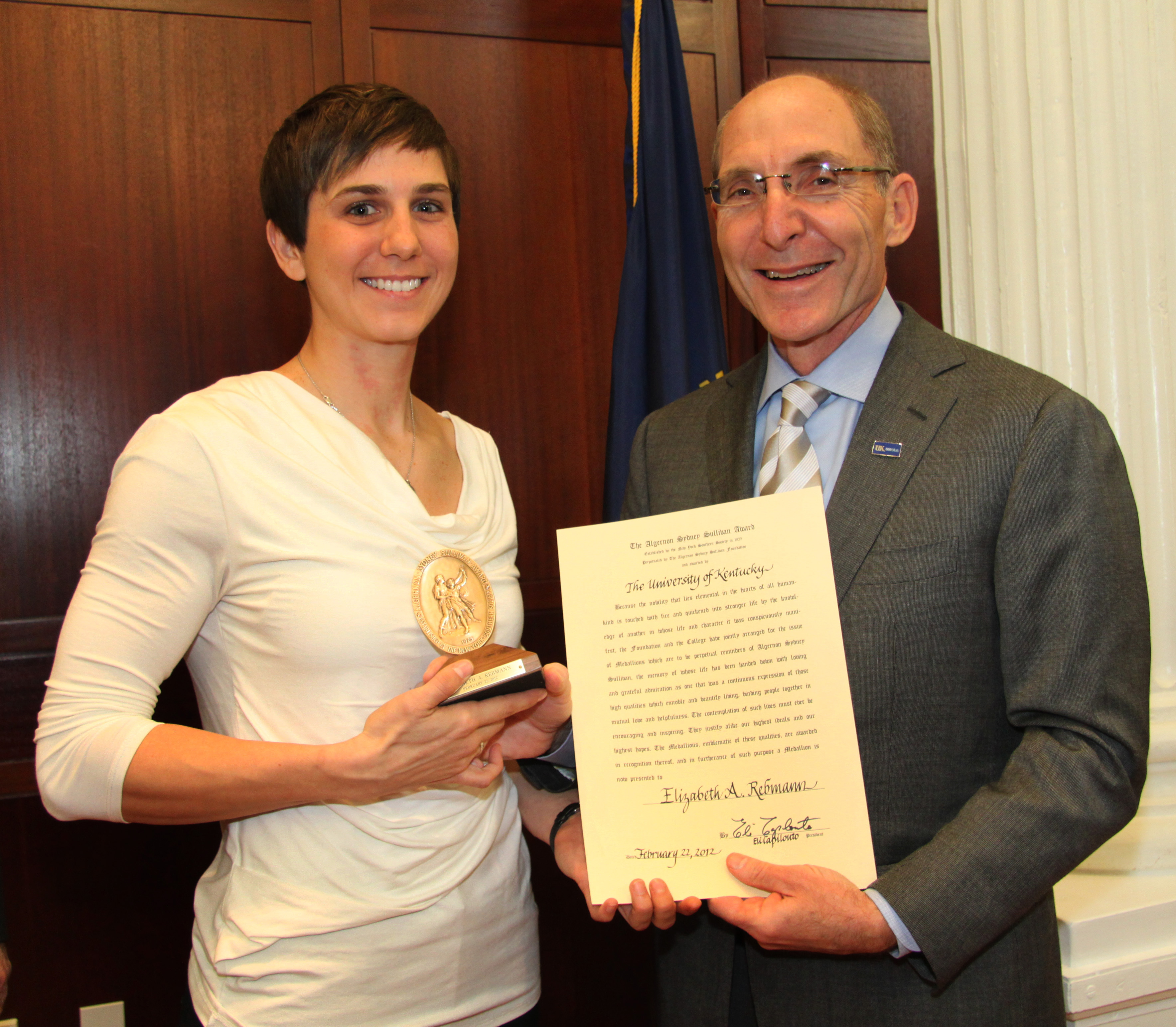 The Sullivan Medallion was established in 1925 by the New York Southern Society to honor the memory of Sullivan, a distinguished lawyer and philanthropist. Fifteen colleges and universities in the South, including UK, present the medallions annually.
In 2004, at age 17, Rebmann joined the Kentucky Army National Guard and was stationed in Iraq in 2007-08.
A few years later, while enrolled at UK, she volunteered to be deployed to Afghanistan with the Army's Agribusiness Development Team. There she worked with Afghan women to grow saffron as an alternative to opium poppies.
"It's not all about fighting over there. We're there to help better their lives," Rebmann said.
On her own initiative, Rebmann organized a drive to collect school supplies for more than 100 Afghan children. She coordinated a winter-clothing drive, and she piloted a program to teach women how to purify contaminated drinking water using plastic bottles recycled from her base.
"They have really strong ultraviolet rays. So you just set a bottle of water out for six hours in direct sunlight on a piece of tin, and it purifies it," she said. "I found the dirtiest water I could imagine and tested it, and it actually worked. Because a lot of children, they get E coli. and diarrhea from the dirty water, so that was just one small thing that we could do that would change someone's life."
Her father, James Rebmann, an environmental planner with Lexington-Fayette Urban County Government, said Elizabeth has been involved with community service since she was a child.
When she was about 8, "she was out at McConnell Springs dragging the trash out" of the city nature park, he said.
"My basic philosophy has been I want to make this a better place as a community before I die, and she saw the work that I did, and she is following right in my footsteps, helping people and getting involved in community activities and now worldwide activities."
Read more here: http://www.kentucky.com/2012/02/01/2052183/lexington-woman-receives-sul…
Tags:
geography