The Canadian Association of Geographers recently held a special session on Changing Priorities in Physical Geography (I did not attend or participate; I was made aware of it by a Canadian colleague). The session description is given here. It got me to thinking about a piece I wrote more than a decade ago in response to a similar mandate, called Laws, Contingencies, and Irreversible Divergence in Physical Geography. I thought I would revisit what I published back in 2004 to see how it holds up. The paper focused on physical geography as science and scholarship, as opposed to the institutional politics of physical geography within geography as a whole, and relative to other disciplines. However, I did predict that physical geography—as geomorphology, climatology, biogeography, soil geography, and geospatial approaches to Earth & environmental sciences—would grow and thrive. However, I also expressed doubt that this work would continue to be called physical geography, and the extent to which it would be conducted under the institutional auspices of geography. Here I think that, so far, I have been on target. Indeed, the growth of physical geography, but not labeled as such, has resulted in a proliferation of new labels such as Earth system, critical zone, climate, ecosystem, and environmental science; geoecology; biodiversity studies; ecoregional mapping; surface processes; etc. 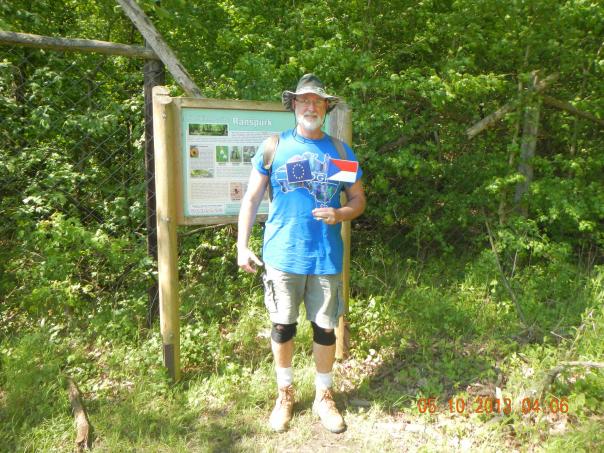 Waving the flag for physical geography! Well, actually the flags of the Czech Republic & the EU . . . .

I think there are several factors at work here. First, physical geography is simply too important, too vital, too much in demand to leave to those of us who use the geography label and have the geography affiliations--because there are simply not enough of us. To meet this demand, we need scientists from other backgrounds. Second, a few decades back (including when I was doing grad school) those whose interests were clearly interdisciplinary; who were interested in combining geology, ecology, soil science, atmospheric science, were not readily accommodated by other disciplines. Geography was one of the few welcoming academic homes for someone whose interests transcended the traditional boundaries of geology, biology, etc. This is no longer the case. In addition to the myriad of new programs in geosciences, environmental science, watershed science, etc., many programs in, e.g., soil science, forestry, oceanography, geology, etc. are open to inter-, multi-, and transdisciplinary work. Geography is no longer the only choice. Finally, I think there are some push factors. Many human geographers and geography programs have de-emphasized, or even abandoned, quantitative and scientific approaches. While the actively anti-scientific strands of critical social theory have either calmed down or we’ve learned to ignore ‘em (I’m not sure which), many geography programs, while not necessarily hostile to the geoscientist, are not particularly welcoming, either.

The 2004 essay, however, was focused on what I saw as four critical challenges: deterioration of common cores of knowledge due to intellectual niche specializations; a need for conceptual thinking to catch up to technological advances; explicit incorporation of human decision making in analysis of Earth surface systems; and confrontation of the creative tension between nomothetic and interpretive science. Let’s see how we’ve done.

The “irreversible divergence” in the title referred to increasing fragmentation and specialization throughout geosciences, with the result that even, say, geomorphologists or plant ecologists do not operate from a common core of principles and knowledge, much less physical geography or ecology as a whole, and less still geographers or biologists.

From the 2004 paper: “As knowledge expands, the ability of any individual to cope with it stays constant, obliging (succeeding generations of ) individuals to specify increasingly narrow intellectual niches. Specialization and fragmentation is inevitable and unavoidable. As intellectual niche specialization occurs, specialists become increasingly removed from traditional disciplinary cores. This is not entirely—and not necessarily—a bad thing. New, specialist groups may be independent of unhealthy or stifling cultures, politics, authorities, and orthodoxies of the traditional disciplines. There is also the potential for fruitful interchanges and synergies, drawing from different scientific cultures . . . On the negative side, fragmentation may lead to scattered individuals and groups of specialists who operate with no central frame of reference or core base of knowledge or epistemology. This . . . may inhibit communication within and between the specialist groups, and may also be inefficient as wheels are reinvented. The emergence of new cores independent of the traditional disciplines is possible, but is inhibited by the absence of central institutions and authorities to define, negotiate, or enforce a common body of knowledge. Therefore, as these cores emerge, the common body of knowledge is likely to be ad hoc and maintained by informal networks.”

As a simple forecast based on trends a decade or more ago, I think this has proven to be dead on. Irreversible and inevitable divergence has occurred, and no new cores have developed.

In the early 2000s, and continuing today, remarkable technological advances have occurred for surveying and mapping, dating, remote sensing, simulation modeling, laboratory analyses, and much more. In 2004 the new methods were mainly being applied to answer traditional questions. The challenge, as I saw it, was to frame new problems. So how have we done?

Well, to some extent the new tools are still being used on old problems, and to some extent theoretical and conceptual developments have been and are technology-driven. However, I judge that physical geographers have indeed made progress in framing new problems and making theoretical/conceptual advances. For example (and there are many more), new ideas on tight coupling between biological and geophysical processes have emerged, as well as key concepts about complex dynamics in environmental systems.

“No geographer needs to be convinced about the overwhelming impact of Homo sapiens on the global environment, and most still buy into, at some level, the value of synthesizing human and ‘natural’’ science and scholarship” (Phillips, 2004). The same can be said for the scientific community as a whole at this point. The challenge I articulated, though, was not merely the study of humanity’s effects on the planet, but to do so in a way that gives comparable theoretical/analytical weight and sophistication to both biogeophysical and human (cultural, political, social, economic) factors.

We haven’t done so well on this one. Back then I gave four examples that exemplified the approach I was promoting, and I could not add many more. I think that’s partly because it is simply difficult, and also related to the irreversible divergence. Who can possibly keep up with all the geomorphological or ecological literature on, say, wetland responses to sea-level rise, much less the relevant literature on coastal and wetland planning, management, and engineering, much less still key ideas from human geography and other social sciences? Even with a team, the conceptual and methodological frameworks are often so different that a relatively seamless synthesis is fiendishly difficult.

Some of the more recent efforts to integrate human and physical geography (or social and geosciences), such as the critical physical geography movement, or political ecology, strike me as fairly one-sided. That is, they seem to want geoscientists to embrace the perspective of critical social theorists, without any corresponding effort from the “other” side to embrace geoscience perspectives—and perhaps most importantly, little or no consideration of shared perspectives outside the prevailing social theory orthodoxies.

Finally, scholars who attempt serious study of environmental effects on human society or even reciprocal influences, are almost invariable accused of environmental determinism, and thereby summarily dismissed by many human geographers, anthropologists, and economists. I blogged about this earlier.

This relates to one of the common themes of my work over the past two decades, and many of these blog posts: the irreducible importance of geography and history (geographical and historical contingency) and the need to integrate local, historical, and interpretive approaches with nomothetic approaches which emphasive generally or globally applicable laws. “The challenge is to fully integrate nomothetic and idiographic approaches—to move from methods that place either historical and geographical particulars or general laws in a clearly secondary position to those that give equal or comparable weight to laws and contingencies” (Phillips, 2004).

Here we’ve done pretty well. Most published work is still pretty firmly based on the dominance of one approach or the other, but an increasing amount of research meets the challenge outlined above. Further, it is now more often acknowledged that contingent factors may be critical, even where they are not directly dealt with.