Flexibility. You want it in your joints, in your schedule and in your undergraduate major. Rising UK senior Ben Barnes found the right blend of flexibility as a Topical Studies major.

As you might think, it takes a significant amount of initiative on the part of the student to design a unique program of study, and you need a lot of clarity when it comes to knowing what you want your future career to be. “And I did,” said Barnes. “I had that clarity when I was designing the program.”

Barnes is not your typical American college student. For starters, he’s Australian, and at 24 he is also slightly older than his fellow seniors. Barnes took a few years off between high school and college to explore his options, working on mango farms and later a government apprenticeship program.

“All of these work-related experiences combined to tell me what I wanted to do in school and I started refocusing,” said Barnes. 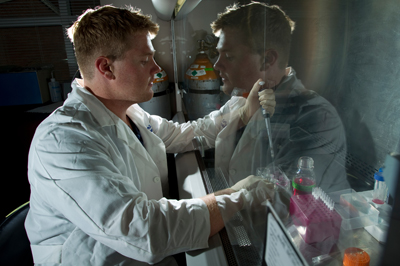 Coming to UK as an international student with a year’s worth of course work from an Australian university, Topical Studies was a particularly good fit for Barnes. “It has a very flexible curriculum and I could choose everything that I had done up to that point to count toward my major,” said Barnes.

Originally interested in sports medicine, Barnes was fascinated by the musculoskeletal system and how to make it function in the most optimal way.

“But the more I looked into that, the less and less satisfying that was because you’re helping people who are already in the top 2 percent of the population in terms of endurance and strength,” explained Barnes. “To me, helping people that are in the bottom whatever percent get back to being normal is a little more satisfying.”

This led Barnes to focus his program of study on aging and gerontology. As a sophomore Chellgren Fellow, Barnes began working in the lab of Esther Dupont-Versteegden, an associate professor in the UK College of Health Sciences, where he began developing a strong interest in medical research. His goal after college is to complete a combined M.D./Ph.D. program and have a research focused career.

Barnes has an opportunity to jump-start his research program as a prestigious Gaines Fellow. Recipients enter the program as juniors and, with a cohort of 11 other students, take specialized classes together on topics such as identity, theoretical physics, history, architecture, creative writing and music. “It was a very broad study that has helped me a lot in the way I think,” said Barnes who just completed his first year as a Gaines Fellow.

The Topical Studies major is geared toward looking at a general area from the vantage point of a myriad of different disciplines, and the Gaines Fellowship compliments this approach perfectly.

“I entered as a Gaines Fellow not as a complete scientist but definitely being very science focused,” said Barnes of his experience. “I came from looking at things almost in a lopsided fashion to maybe not mastering all those different ways of thinking, but definitely appreciating them.” 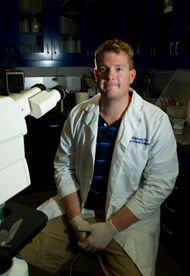 Barnes plans to take a similarly multi-faceted approach to his senior Gaines Fellow research project, which is still in the early stages, as he looks at the physical as well as social consequences of a condition called sarcopenia, or age-related muscle wasting.

“I’m going to be looking at certain physical consequences such as diseases that come from inactivity that grow out of muscle wasting, but also ways in which people who are dependent on other people as a result of sarcopenia are viewed and how they view themselves,” explained Barnes.

This multi-disciplinary approach is born out of a program of study that values flexibility and creativity in pursuing a specialized academic interest. And Barnes hopes that it ultimately helps people regain strong, flexible muscles as well.